So now it’s time to study for our Nitrox certification. 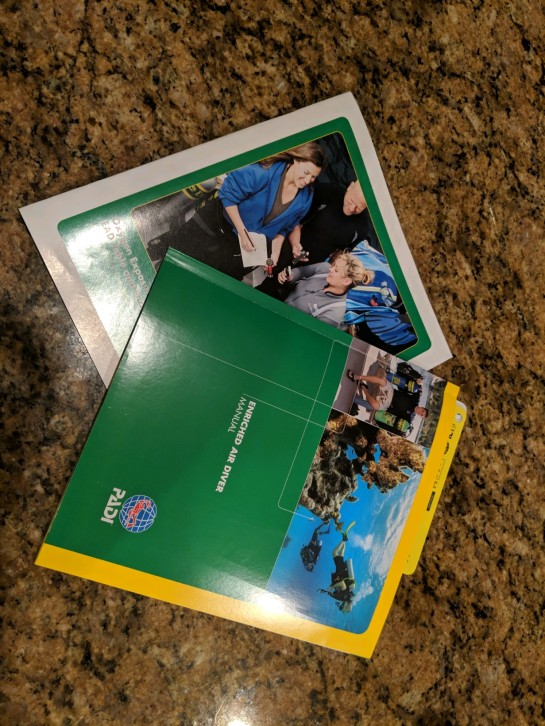 “Nitrox” – aka “Enriched Air Nitrox” – means air that actually has LESS nitrogen than regular air, although to my ear “Nitrox” sounds like it would have MORE nitrogen. That just goes to show the extent of my prejudices.

The atmosphere contains right at 21% oxygen, but the most common Nitrox mix is 32% oxygen. That’s a pretty big difference – it means 50% more oxygen. And that’s cool, because we like oxygen – but the most important thing is that it means less nitrogen, and that’s the whole point.

The main reason for doing this is that it allows one to stay underwater at depth for longer period.

When one is at depth, then the higher pressure causes nitrogen to dissolve into the bloodstream as small bubbles. When you surface, then the nitrogen has to come back out of the bloodstream – and if that happens too quickly or violently, then that’s what causes decompression sickness, also known as “the bends”. This can be avoided by doing a “decompression stop” at a mild depth like 15 or 20 feet, just hanging out and blowing bubbles while one’s bloodstream pretty much does the same thing.

The amount of time that one can stay at depth without having to do a “decompression stop” is called the “no deco time limit”. And nitrox changes that, a lot. Just think of it as doubling the “no deco limit”, and you’ll be in the ballpark.

But TANSTAAFL – with this benefit comes a risk.

There’s also a thing called “oxygen toxicity” that has all sorts of badness associated with it. Now, diving with regular air, you’d have to go down to 220 feet to risk oxygen toxicity – and if I’m at 220 feet, it means that something blew out and I’m dead already.

But “enriched air” means more oxygen, and that means more risk of oxygen toxicity. And it can happen at depths that I might possibly explore.

(N.B. – I believe that my greatest-ever depth was 124 feet, and I went that deep by NOT staying with my partner (Ethel) and, instead, following the other folks in our dive group – who were, as it happens, diving with nitrox).

So that’s why we have to know the EAN mix (anywhere from 32% to 40%) when reading dive charts – and we have to enter it into our electronic dive computers; so that we know when we’re at risk.

(Now, just between you and me, nitrox doesn’t really help me that much, because I burn through my air faster than my maximum no-deco time anyway. But I hope to get better at saving air; the best way to do that is to dive more.

The best way to do THAT – dive more – is to move to Mexico. But don’t even mention it. Ethel gets mad if you mention it 🙂